Bruce Jones has built premium surfboards for three decades. The company, renowned worldwide for its products, was founded by Bruce in 1973 after he shaped surfboards for many years with some of the biggest surfing names in the sport: Hobie, Gordie, and Brewer to name a few.

Bruce was there at Hobie's, during the golden age of the mid 1960's, when the best shaping talent in surfing history was gathered in one place: Phil Edwards, Dale Velzy, Terry Martin, John Gray and Ralph Parker, among others. Starting in the gluing department, Bruce worked his way into rough shaping, then into the actual shaping room and lost no time in getting help from everyone involved in shaping surfboards. In the mid to late 60's, Bruce moved to Huntington Beach, California where he shaped for Vardeman Surfboards, doing all the Jackie Baxter Models, which to this day are considered rare collector's items, being the first board on the west coast to combine the low tail rails of the Hawaiian Gun (for speed), with a refined longboard outline and eventually a turned down, flat-bottom nose for superb nose riding (influenced by the famous Morey/Pope John Peck Penetrator model).

At night, Bruce would shape surfboards for Gordie Surfboards. Gordie (Gordon Duane) had a reputation for being a superb craftsman but very hard to get along with. Bruce put up with him and learned some of Gordie's shaping techniques and most of all his dedication to perfection through using these techniques. Bruce did a short stint with Dick Brewer in '69, ghost shaping surfboards for him on Maui. He then went on to shape for Russell Surfboards, Newport Beach, and then Ole Surfboards in Sunset Beach, California from where he launched his own business. Bruce has made a number of surfboard blank molds for Clark Foam and most recently for US Blanks. 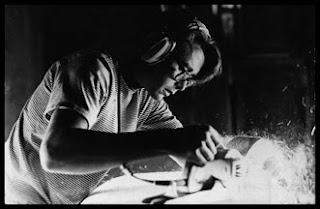 Enjoy this great little video with Bruce Jones shaping and designing filmed and edited by his son Brock.

Round 2 - Bettis Shapes Up An Orange Foam from US Blanks!

Round 2!!! We had Matt Bettis give the Orange Foam from US Blanks a whirl. The more shapes the better when it comes to R & D on a new blank. This time we got some better audio and video equipment so we don't look as ghetto...still ghetto but with a touch of class! Anyways, the foam is looking solid so check it out and listen to what Matt had to say about the blank. We'd like to thank Matt for donating his time and expertise in the name of research.

Foam E-Z and Matt Bettis shape a US Blanks Orange Foam from grant ramey on Vimeo.