Pottz Is In The House!!! 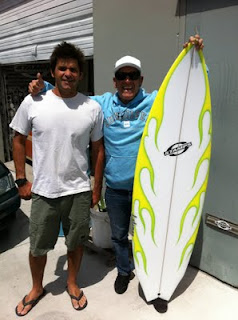 Martin "Pottz" Potter was recently in town to pick up his new board from Tim Stamps, that's right, Tim made Pottz a killer new stick. They met a few months back while Stamps was visiting/shaping on the Gold Coast of Aus. I asked Tim how the whole thing transpired and here's what he said: "I talked Pottz into ordering a board after spending the day watching the Snapper Rocks contest and putting down a few coldies." 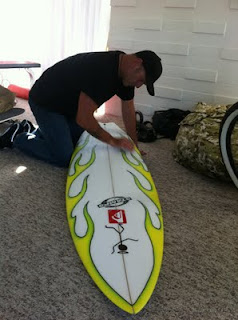 Potter was passing through on his way to Peru for the ISA Worlds Junior Champs. I just talked to Pottz and he told me that this event is the event that has spawned some of our top talent on the WQS, names like Owen Wright, Jordy Smith, Steff Gilmore, and many more. This event is for kids under 16 and involves 26 to 28 different countries around the world. Pottz has been working for Quiksilver since 2000, helping to develop their youth team riders. He also announces at various Quiksilver events around the world. David Scales' from 1HOURINHB was lucky enough to hook up with Martin Potter too. David shot the below video as Pottz worked with a couple groms giving them Pro advice before they head down to Peru. Mar Ohno of Japan also came by to lend his WQS experience.

Potter began surfing in Durban, South Africa, at age 10. By 15, he took the world by storm, defeating Shaun Tomson to win his first professional contest and finishing second in his first two IPS events. The following winter at the Pipe Masters, he outlasted the meanest tube of the winter, a 12-foot screamer that delivered him into stardom.

Through the '80s, he was a card-carrying member of the Big Four, along with Tom Curren, Tom Carroll and Mark Occhilupo. His fluid, powerful, radical style -- an unheard combination -- made him one of the most admired surfers anywhere, rippling several generations after. He also helped pioneer aerials, although his were fluid extensions of powerful off-the-tops rather than the forecast hip-hop tricks of today. A teenaged Kelly Slater even patterned his style after Potter's, plastering his walls with shots of Potter putting his trademark green-and-yellow explosion boards through their paces.
Posted by Unknown at 9:03 AM No comments: