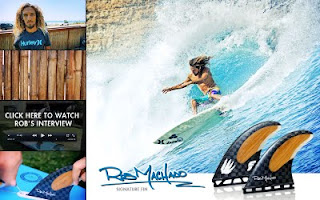 The Rob Machado signature fins are available to the public and are in stock at Foam E-Z. They look really awesome and have similar construction to the Black Stix but are made with renewable resources.

After nearly 10 years of riding the Futures system, Rob Machado has signed off on his first ever signature fin. The collaboration between Rob and Futures is the perfect blend of cutting edge hydrodynamics and environmental sustainability.

Rob’s fin features a torsional flex pattern, thanks to Futures’ V2 foil and a layer of strategically placed carbon fiber. Combined with renewable, fast growing bamboo, the fin is both light and lively. Designed for Rob’s explosive style, the bamboo carbon matrix stores potential energy and releases it as a burst of kinetic speed.

Rob had been riding the V2 AM1 BlackStix for years, he said, “I knew that was a good starting point for me in designing a fin. I just really liked the flex that the BlackStix had. I don’t know exactly what it does but it feels good. I am more of a feel kind of person, you know… sometimes it just feels good.”

“We have been lucky to work with Rob and we are proud of how this fin turned out,” says Head Designer and Founder Vince Longo.

Rob’s fin is made of a high quality epoxy resin, instead of polyester. Not only is epoxy resin stiffer, lighter and better performing, it is also more resilient and releases less VOC’s (Volatile Organic Compounds).

Posted by Unknown at 7:15 AM No comments:

Entropy Resins is pleased to announce that its Super Sap® 100/1000 System has been certified as a USDA (United States Department of Agriculture) certified bio-based product.

The USDA Bio-PreferredSM Program is a voluntary labeling program used to certify consumer bio-based products in the U.S. The certification uses the ASTM D6866 standard to measure the biobased carbon atoms in a product. "With so many products in the market place being sold as 'bio-based', it's difficult today for customers to distinguish between what is real and what is green-washing", states Entropy CEO, Desi Banatao. "With the ASTM certified 37% biobased carbon measurement for our Super Sap 100/1000 system, and our calculated total bio-mass of 50% which includes the bio-based oxygen and nitrogen atoms, we are walking the walk and setting the bar for our industry", states Banatao. 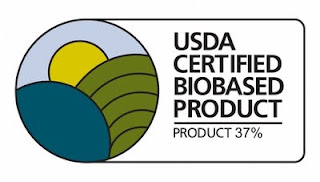 From their start in 2009, Entropy Resins has pushed the boundaries of what can be done with bio-based materials to create strong, durable, and lightweight performance composites. Today, their customers range from artists and hobbyists, to sporting goods manufacturers and wind energy. Entropy Resins and the USDA BioPreferred Certification Program sets the next standard in verifying biobased content for sustainable performance composite resins.

The Entropy Bio-Epoxy has similar working times to the Resin Research Epoxy and the clear resin is very clear. If you want to reduce your board building carbon footprint this along with Marko Foam's EnviroFoam is a great place to start! Come on by or give us a call for more info.
Posted by Unknown at 6:29 AM No comments: